I'll briefly summarise this one by paraphrasing Julian Symons' Sunday Times review that appears in part on the back cover, as to go into further detail risks giving away too much of the plot. 'The girl has been burned in a house on the French Riviera. Her companion, a girl of the same age died in the fire. Is the survivor Mi, the heiress, or Do, her adoring platonically lesbian companion?' 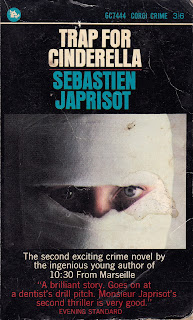 Sebastian Japrisot is a pseudonym of Jean-Baptiste Rossi, and this pseudonym is an anagram of the author's real name. The writing is stylish and witty, and even though the events in the novel are certainly far-fetched, they remain just this side of credible. The well-realised backdrops - particularly those set amongst the idle rich and which recall the French adaptation of Patricia Highsmith's The Talented Mr. Ripley, Plein Soleil (Purple Noon) - suggest a familiarity with the disdainful and morally compromised that gives the reader a strong sense of whom to root for, even though the payoff may leave a sour taste (and for those who think they have it figured out early on, there are a couple of surprises to catch you off-guard).

Riviera noir set predominantly amidst a sun-dappled locale, and recommended for those on the lookout for some continental 60s-set suspense.

AFTERWORD: As with many 60s noir and hardboiled titles, this Corgi paperback edition seems to be rather elusive these days (although I keep forgetting that books of this vintage are over forty years old, so there's no reason why they should still be plentiful). Some of the reprint editions also seem to be priced on the high side (the 1990 No Exit Press edition appears to be the most common and cheapest), but an English language film adaptation directed by Iain Softley is due to be released in late 2012, so a movie tie-in edition may be in the offing (NB There was an earlier 1965 French language adaptation that does not appear to have been released on video or DVD or translated into English).
Posted by noir guy at 16:47