Harry London has sunk almost as far as he thinks he can go. After finding his wife Lucy in flagrante with local lothario Dick Stewart (and that first name is clearly apposite!), the ensuing melee leaves Lucy dead and Harry covering up his apparently murderous act. However, when a woman called Jean Cummings - who knew Lucy prior to her marriage - unexpectedly arrives at Harry's shack, the wheels are of revenge are set in motion.

However, can Harry - who is now deeply mired in alcohol, disgust and self-loathing - trust Jean or himself, or will hate drive them even deeper into a hell of their own making? 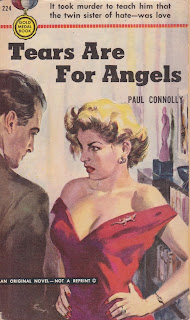 It's probably best to conceal the majority of this narrative, which twists and turns in often surprising fashion before a rousing climax in which all is finally revealed.

Essentially, this is a character study concerning rebirth and redemption, and one that is cannily plotted and tightly told. The novel literally begins with a bang - well, actually, it almost begins with a rape that further tarnishes the already besmirched Harry. However, every incident provides depth and motivation - even if it doesn't quite jibe with our more politically-correct times - in a tale that grips as it goes due to fine, evocative writing that vividly portrays a time and place, as well as charting the path to possible salvation of a man's soul.

It's fine, muscular stuff that's both hardboiled and noirish, embodies the best of the 1950s Gold Medal paperback original style, and is therefore a book that comes highly recommended.

AFTERWORD: Paul Connolly was a pseudonym for New York Times political reporter and columnist Thomas Grey "Tom" Wicker, who wrote this novel and two others, Get Out Of Town and So Fair, So Evil for Gold Medal in the early 1950s. I haven't read the other two Gold Medal titles, which are rumoured to be the lesser of his trio. However, on the basis of this one, they are probably worth reading, with Get Out Of Town being seemingly tougher to find than the other pair. The cover art for this one was drawn by the prolific Barye Phillips.
Posted by noir guy at 07:38